You are here: Home / Citizen Science / Blue mussels: # 1 mollusc in the Bay

The animals (mostly molluscs) that live on and in the seabed play a a key role in cycling nutrients that underpin the health of the Bay food chain. Despite this importance, there have been few longterm studies of shellfish in the Bay. Since 2009 the Baykeeper shoreline shell surveys have been conducted on beaches across all regions of the Bay through the annual Summer By the Sea program. Local communities are engaged to collect an example of each shell species they find within a defined area on their beach. At the end of the search the largest of each shell species is measured and photographed and its estimated abundance recorded.

Regular surveys provide clear evidence of which species are most common or rare; and ongoing surveys will enable any changes in abundance to be detected. Analysis of 10 beaches which have been surveyed at least 5 times found the Blue Mussel Mytilus galloprovincilais planulatus to be the most abundant mollusc recorded. Of the 32 species recorded across all sites Blue Mussels were by far the most abundant, followed by Anadara trapezia (Sydney Cockle) just ahead of Fulvia tenuicostata (Thin-ribbed Cockle). 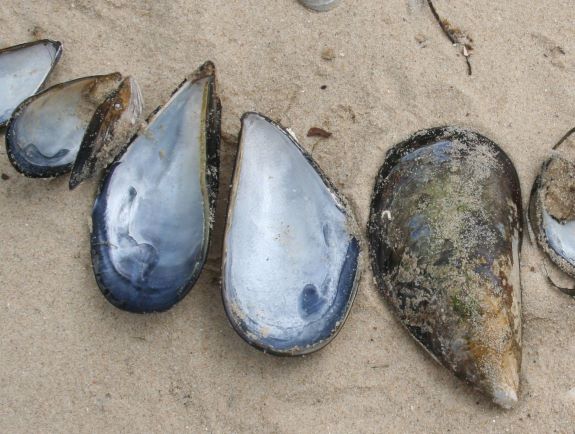 Blue Mussel was also the most abundant shellfish recorded in an archaeological study of 98 Aboriginal middens on Mornington Peninsula (Sullivan, 1981). It’s great to know they’re still number 1!The abundance of Blue Mussels is not surprising considering that they colonise inter-tidal reefs and structures including pier pylons and commercial acquaculture operations in the Bay. As filter-feeders, they capture tiny plants and animals from the water column.  Blue mussels are an important prey for eleven-armed sastars, fish, and rakali. Special thanks go to Waterkeeper Alliance for funding the data analysis and a suite of associated publications.