The ‘Grey to Green ‘ project is an innovative collaboration between City of Greater Geelong and the National Centre for Coasts & Climate (University of Melbourne) to address coastal erosion at Ramblers Road (Point Richards).  A ‘living breakwater’ running parallel to the beach (approximately 150m offshore) was installed during March – May 2019. To assess the impacts of the installation Port Phillip EcoCentre recorded sand surface levels along 12 transects across the beach and conducted and live mollusc sampling in the sandy inter-tidal zone, before and after the installation. 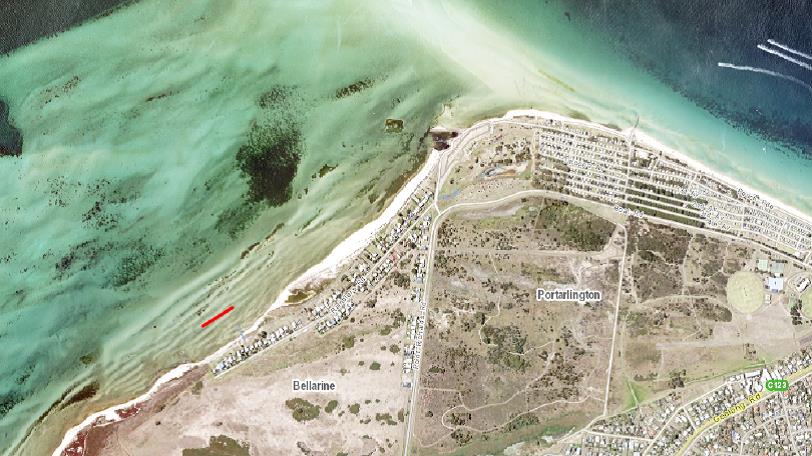 Bird’s -eye view of Point Richards reef (shown in red)Monitoring of sand surface levels has found erosion to be ongoing at transects that are located towards either end and beyond the reef protection zone. At the same time, substantial accretion of sediment has been recorded within the reef protected zone between at Transects 3-7. In addition to providing new sedimentary habitat for molluscs an increase in seagrass cover has been observed in this area.

Port Phillip EcoCentre staff are authorised by DPI to conduct live mollusc surveys under conditions outlined in Permit # RP1176. The ‘Grey to Green’ sampling was conducted by Neil Blake with Gordon TAFE students, sieving shovel samples at 4 metre intervals along transects to record the species and number found in each sample. All molluscs were returned to their original location within minutes of being found.